Dangers of Tampons are described here

My attention to the dangers of the use of tampons was recently brought up by the occurrence of a TSS, Toxic Shock Syndrome, in one of my friends.

Why should I talk about it in this fibromyalgia newsletter?

The reasons are simple.

• Most of fibromyalgia sufferers are women

Tamps are mostly used during menstruations but are also increasingly used for urinary incontinence. 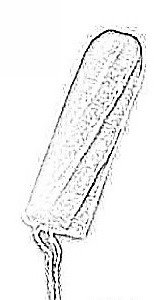 What are the risks of tamps ?

Rare but deadly, it is due to bacteria, staphylococcus aureus (staph aureus), which are present in the vagina of about 20 to 30% of women. In some circumstances, these bacteria will produce an endotoxin, TSST-1, that can get in the vascular circulation and produce a severe immunological reaction that can kill.

This reaction starts with a high fever, vomiting, sore throat, diarrhea, rash looking like a sunburn, muscle pain, dizziness and fainting. Those signs, so common in fibromyalgia, go at first unrecognized until coma and death.

The presence of synthetic fibers such as rayon in the making of a tamps favors the development and proliferation of staph aureus which feeds on them.

The FDA suggests the following guidelines for decreasing the risk of contracting TSS when using tampons.

• Consider using cotton or cloth tampons rather than rayon

• Change the tampon at least every 4 to 6 hours

• Alternate usage between tampons and pads

It is a condition whereby the endometrium that normally grows inside the uterus grows outside of it.

It is a cause of pelvic pain and infertility.

It may occur as an added morbidity in fibromyalgia sufferers.

Tamps have been described amongst the causes of endometriosis.

Tamps have been suspected because of the development of other bacteria that invade the uterus as well as the presence of EDCs (read on).

Other bacteria have been the cause of adhesions within the reproductive apparatus, causing infertility.

The presence of endocrine disruptors chemicals (EDCs), such as dioxins, in the synthetic fibres is suspected in the above problems as well as in the development of cancers.

This is why it is important to follow the FDA suggestions and if necessary try to use those made of cotton.

And remember to wash your hands before inserting it !