Brain Fog Is Due To An
Abnormal Cerebral Blood Flow

Brain Fog is a nightmare for fibromyalgia sufferers. It impairs their life and is seldom believed by doctors, coworkers, friends and family.

We now have the proof. It is due to an abnormal cerebral blood flow!

Up to now brain fog was a frequent complaint in fibromyalgia

In our database, almost 80% of fibromyalgia sufferers (1527/1923) have brain fog! But it was a complaint that was only substantiated by history and subjective tests.  And it has nothing to do with gender, females and males suffering equally from it

But now a scientific proof may have emerged

This is a great advance in knowledge on fibromyalgia and a further proof that it is a true disease.

Furthermore, not only does it show a general decrease in cerebral blood flow but also a greater one on the left side of the brain compared with the right side. This is baffling and theories will abound. 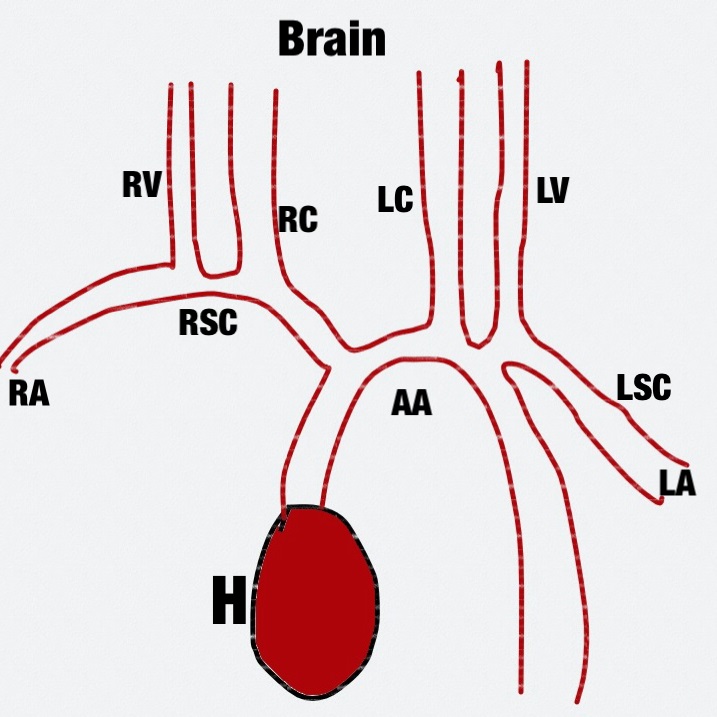 The brain gets its blood from 4 arteries. The two carotids, RC and LC, and the two vertebrals, RV and LV. The right carotid is the closest to the heart and will receive preferential blood flow in case of decreased blood flow.

We think that it may be a phenomenon known as "stealing". This phenomenon usually described as "subclavian steal syndrome" is marked by a decreased blood flow in the arm and a retrograde steal of blood flow at the expense of the brain to compensate for the left arm. One of the marker is a decreased blood pressure (BP) in one arm when compared to the other arm.It is also marked by fatigue like in brain fog as well as loss of balance & falls.

This situation is even more possible when one remarks that in both situations, the "subclavian steal syndrome" and fibromyalgia the Raynaud's phenomenon is common. Raynaud's is a phenomenon whereby the fingers or the toes become white and blanched under cold or stress conditions. 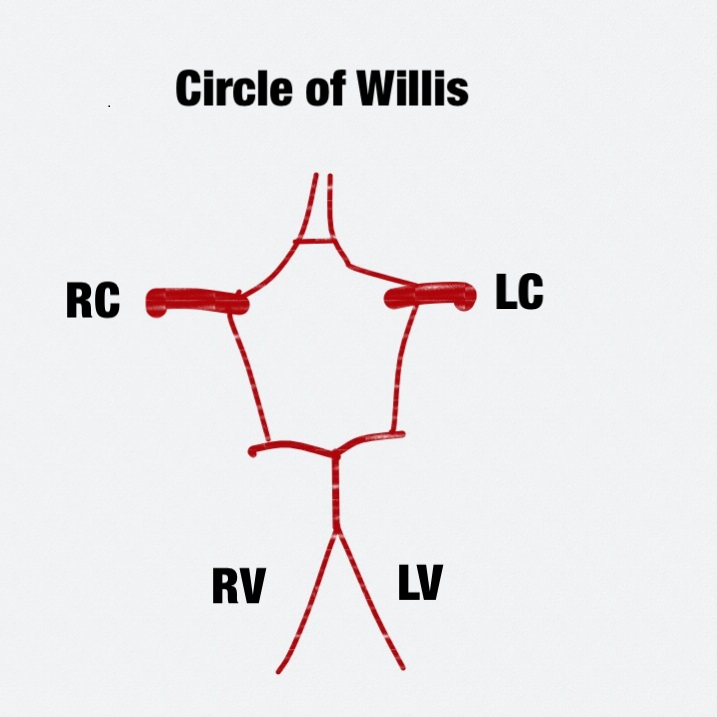 Fig 2: The Circle of Willis

At the base of the brain there is an arterial structure of communicating arteries known as the circle of Willis. This allows the brain to receive blood flow from its four supplying arteries RC, LC, RV, LV and compensate partially or fully from a deficient artery.

Another proof for fibromyalgia !

Lastly, we would like to point out that this phenomenon of a decreased blood flow when the brain needs more, like in arithmetic processing, not only proves the poor circulation of fibromyalgia sufferers but also is a further argument for the origin of fibromyalgia: A Muscle Cell Disease !

Objective: There is ample evidence for cognitive deficits in fibromyalgia syndrome (FMS). The present study investigated cerebral blood flow
responses during arithmetic processing in FMS patients and its relationship with performance. The influence of clinical factors on performance and blood flow responses were also analyzed.

Results: Patients' cognitive processing speeds were slower versus healthy controls. In contrast to patients, healthy controls showed a pronounced early blood flow response (during seconds 4-6 after the warning signal) in all assessed arteries. MCA blood flow modulation during this period was correlated with task performance. This early blood flow response component was markedly less pronounced in FMS patients in both MCAs. Furthermore, patients displayed an aberrant pattern of lateralization, with right hemispheric dominance especially observed in the ACA. Severity of clinical pain in FMS patients was correlated with cognitive performance and cerebral blood flow responses.

Conclusions: Cognitive impairment in FMS is associated with alterations in cerebral blood flow responses during cognitive processing. These results suggest a potential physiological pathway through which psychosocial and clinical factors may affect cognition.

Learn more on fibromyalgia by reading these books

Have your say about what you just read! Leave me a comment in the box below.
Copyright © 2008-2020 All Rights Reserved Last updated: November 21st 2020